Swim Team Off To Strong Start 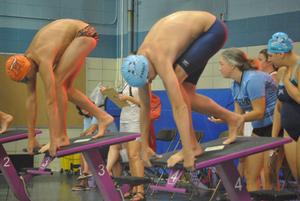 Swim Season Update
The 2018 swim season has gotten off to a successful start through the weekend of 9/23, with the ever important Region and State meets still to come. Region III-5A expanded this year, bringing in Hillcrest, Mauldin, and traditional state power Riverside to go along with the usual tough region competition. The Girls team has been plagued by nagging injuries to key swimmers, but seems to be peaking at the right time. Recent state qualifying swims by junior Alaina Smith, suggest she is returning to form. She along with senior Hannah Weber have already qualified for the state meet with automatic state cuts in several events. All three relay teams have achieved a state time with Smith and Weber joined by sophomore Emily Hovis and senior Evelyn Shrader in those events. Shrader and Hovis have achieved state consideration cuts in individual events, meaning if there aren’t enough automatic qualifiers in a given event, their times could get them a slot in the state meet. In addition to these upperclass leaders, a young core is developing that should insure continued future success. Eight grader Maddie Parker has been a consistent point scorer along with seventh graders Lyndsey Nielsen and Jennifer Chanes. The girls team has a record of 3-3 in dual meets with a 3rd place finish in the Upstate Invite and a 5th place
finish in the Dreher Invitational.
The Boys team has already achieved considerable success on the season. They have gone undefeated in dual meet action, with the most recent victory over last year’s state runner-up Riverside. They have been led by junior Jack Parker, who has set two records so far this year. He beat his own time in the 500 Free and set a new standard in the 200 Free, breaking an eight year old mark. Parker has won every individual event in which he has competed in the dual meet season. Senior Andrew Johns has also enjoyed success, with a 200 time that would’ve broken the old mark if Parker had not broken it earlier! He has also been mere tenths of a second off establishing a new time in the 100 Free. Seventh grade phenom Brett Bailey has burst onto the state scene with state qualifying swims in five events, a rare feat for a newcomer. In addition to Parker, Johns, and Bailey, junior Connor Chittum has achieved an automatic state time. The three relay teams have also qualified for state with some of the top times in the state on the year in the 200 Free and 400 Free relays. Several Cavs have achieved state consideration times and will be ready to swim in the state meet if they are called upon – Matthew Wilson, Preston Erb, Caleb Bailey, Tommy Giaimo, Ethan Johnson, Dylan Rogers, Andy Cockrell, and Giovanny Perez. This depth will be the key for post-season success. After several years of low expectations, the Boys team should achieve their highest state finish in some time this year with a possible Region championship as well.
Come out and support the Cavs swimmers in the Region Meet on Saturday September 29 at 10am at the Middle Tyger YMCA.