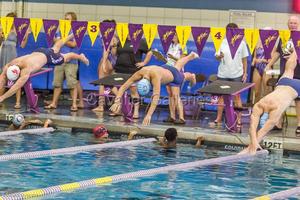 Cavs back and hungry for more

Cavs back and hungry for more


The Dorman Cavalier boys swim team is back and ready for action. Led by Head Coach Amy Bailey, Strength Coach Chad Singleton, and new Assistant Coach Jeff Johns, the Cavs are looking to dive in to the season on August 28 in a meet against Spartanburg Day and Oakbrook. The Cavs return almost all of last year’s core, losing only one senior to graduation. This includes last year’s MVP Jack Parker, All-Region Porter Martin, Matthew Wilson, and Tommy Giaimo, Most Improved Andrew Johns, Most Versatile Connor Chittum, along with Andy Cockrell and Ethan Johnson. The Cavs are also excited about the additions of Brett and Caleb Bailey, Giovanny Perez, and Dylan Rogers.

After finishing last season 12th in state meet and going undefeated in dual meets, the boys look to continue to climb the state rankings and continue dominance in dual meets. The boys finished second in the region last year, and after a tough region realignment aspire to remain in the top 3. The team also hopes to have several swimmers finish top 10 in individual events and have at least one finish top 3 at state. According to Coach Amy Bailey “I already see this team becoming cohesive and tight knit so this will lend itself well to this group accomplishing great things together.” After an offseason of getting stronger and faster, the boys team is ready to kick-start the season and take the team to new heights.