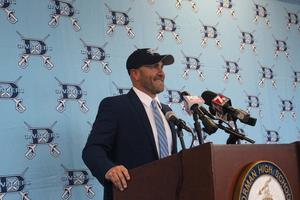 Dorman High School is excited to welcome Dustin Curtis as the school’s new head football coach. Coach Curtis comes to us from A.C. Flora in Columbia, where he spent the last three seasons and had a 28-4 overall record. He replaces Dave Gutshall, who retired last month after 29 years as Dorman’s head football coach.

Coach Curtis becomes just the seventh head coach in Dorman’s 58-year history.  DHS Principal Bryant Roberson says, “We are excited to welcome Coach Dustin Curtis as the new head football coach of the Dorman Cavaliers. I am confident that under his leadership we will continue our Cavalier tradition of excellence.”

Coach Curtis led the A.C. Flora Falcons to an undefeated 11-0 season and Class AAAA State Championship in the 2020 season.  That championship was the first football title in AC Flora history and the first state championship for a Richland District One school since 1970.  Coach Curtis began his head coaching career in 2016 at Westwood High School in Blythewood.  His teams showed steady improvement during his tenure at Westwood. After going 2-8 in his first season, the Red Hawks went 6-6 in the 2017 and 7-5 in 2018.  They reached the second round of the playoffs those last two years.

Dustin Curtis played his high school football at Lexington under Coach Jimmy Satterfield and he played against Dorman in the 2000 state championship game at Williams Brice Stadium.  He went to college at the University of South Carolina where he served in the Gamecock football program as an equipment manager under Lou Holtz and Steve Spurrier.

When asked about his new career move, Coach Curtis says, “Dorman High School is a once and a lifetime opportunity.  The school has an extremely successful athletic program with great leadership.  My family and I can’t wait to be part of the District Six community.”

DHS Principal Bryant Roberson says “Coach Curtis’ passion and enthusiasm for the game of football is contagious. He will bring the experience and the excitement to the program that will motivate our student-athletes to meet and exceed their potential. We are extremely fortunate to add Coach Curtis to the Dorman family and are all looking forward to a great future for Cavalier football!”

Coach Curtis and his wife Jessica, have a son, Grant, who is 11 years old.  Coach Curtis has been a leader in the Fellowship of Christian Athletes and is very active in his home church in Columbia. He is expected to begin his duties at Dorman in January.