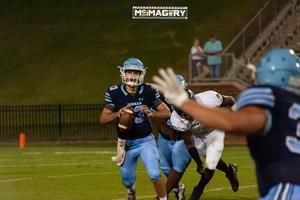 Tonight’s Match-Up
Dorman vs. Gaffney
October 8, 2021
The Dorman Cavaliers host the Gaffney Indians in a Class AAAAA non-region
contest that features two teams that have been ranked in the top ten in the state
all season long. Dorman comes into tonight’s game with an overall record of 3-2
after beginning region 2-AAAAA play last week with a 47-14 victory over
previously unbeaten Riverside. Gaffney has a perfect 6-0 record on the season
which includes victories over Spartanburg and Byrnes early in the year and last
week’s region 3-AAAAA opening 34-0 shutout victory over Boiling Springs.
Dorman coach Dave Gutshall and Gaffney coach Dan Jones have faced off many
times against each other through the years and every game seems to be a thriller
when these two powerhouses collide. Last year at Gaffney, the Indians squeaked
out a 30-29 victory over the Cavaliers.
The Gaffney offense looks slightly different this year in the fact that they are
more of a running team. The Indians run the ball about 63% of the time led by a
pair of talented senior running backs including #10 Tyler Smith, who has rushed
for 678 yards and 15 TDs and #11 Ken Littlejohn, who has rushed for 548 yards
and 6 TDs. Junior quarterback #12 Grayson Loftis, who is a transfer from Blue
Ridge, at 6’4” and 195 pounds is a pro-style quarterback with a big arm. He
spreads the ball out to many talented receivers including junior #1 Edward
Jefferies and senior #9 JaDarius Littlejohn.
The Gaffney defense will mainly play a 3-4 alignment. As is a Gaffney tradition,
the Indians are very athletic and they play an aggressive, physical defense. They
like to bring pressure on opposing quarterbacks from their outside linebackers.
The Gaffney defense is led by a pair of senior linebackers including #4 Jesus
Dowdle and #5 Landon Bullock. #1 Edward Jeffries plays both ways and is a
leader in the Indian’s secondary.
Prior to tonight’s game, the Spartanburg District Six Teachers of the Year and
Support Staff of the Year will be recognized on the field. The Cavaliers will travel
to Duncan next Friday for a showdown with the Byrnes Rebels. Dorman will
return to Cavalier Stadium on September 22nd for the Senior Night game vs. Wade
Hampton.