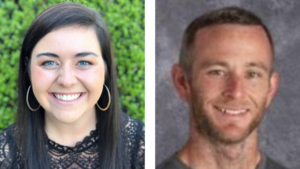 Dorman High School will have two new head varsity golf coaches for the 2021-22 school year.  Olivia Slatton Herring will be the new girls coach and Brad Kelly will take over the boys program.
Coach Herring takes over the Dorman girls golf team from Lewis Terry who retired from coaching following the 2020 fall season.  Coach Herring was a six year golf letterman at Dorman from 2010 to 2015.  She was a key member of the Lady Cavaliers state championship girls golf team in 2015.  She was an All-Region golfer five times at Dorman and an All-State golfer her senior year in 2015.  Coach Herring played one year of golf at Anderson University before having to end her competitive golfing career due to an injury.  She was an assistant coach for the Dorman girls golf team this past season and she serves as a kindergarten teacher at West View Elementary School in Spartanburg District Six.
Coach Kelly will take the helm of the Dorman boys golf team replacing Kurt Owings who has accepted an administrative position as assistant principal at Gable Middle School.  He played high school golf at Byrnes and then went on to play college golf at Spartanburg Methodist College.  He was named the Freshman Golfer of the Year at SMC in 2003.  Coach Kelly has been an assistant coach for the Dorman boys golf team the past three years.  He serves as a physical education teacher at the Spartanburg District Six Child Development Center.
Dorman Athletic Director Flynn Harrell said he is "very excited to have these talented coaches lead the Dorman golf programs.  They both have some big shoes to fill from Coach Terry and Coach Owings, but I know that they will bring a lot of energy and experience to their teams.  They know what it takes to play at a high level in high school golf and to play at the collegiate level.  We look forward to continued success in our golf programs under their leadership."